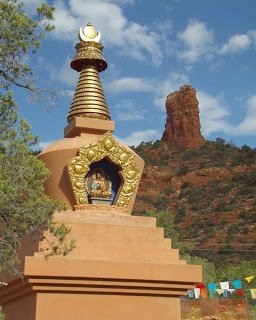 Many profound opportunities presented themselves during my ordination as a Buddhist nun. One such opportunity was to serve as the spiritual arts director for the birth of the Amitabha Enlightenment Stupa. It was 2004 and I lived where I live now – in paradise. I am of course referring to living in the beautiful red rock country of Sedona, AZ. Ground was broken for this project in West Sedona, just under Chimney Rock. As the arts director, I was responsible for the design and creation of the sculptural elements of this sacred monument. This included the sculpture of the Buddha that sits in the gau (the portal or opening at the heart of this Buddhist monument).

The placement of the stupa and many of the design choices in a project of this nature are primarily informed by the Tibetan texts and the specific instructions of the spiritual master overseeing the event. Although the artist must adhere to specifics of the tradition, there is room for creative expression in many of the artistic elements such as the lotus petals, the embellishment of the face of the gau and the umbrella that crowns the spire as well as in many of the finer details. The structure itself has prescribed proportions that represent a sacred mandala. There are ceremonies and prayers of offering, intention and dedication that are performed at each step.

The construction of a stupa is a spiritual event that involves many people, a qualified spiritual master and a great deal of devotion. It has been my honor and my privilege to work with some amazing and talented people, big of heart and long on loving commitment. It has been a profound blessing to be involved in the creation/construction of many stupas here in the United States.

“When you build a stupa, you are building your own Enlightenment”

©2022 | Designed and Developed by The Myss Miranda Agency, LLC